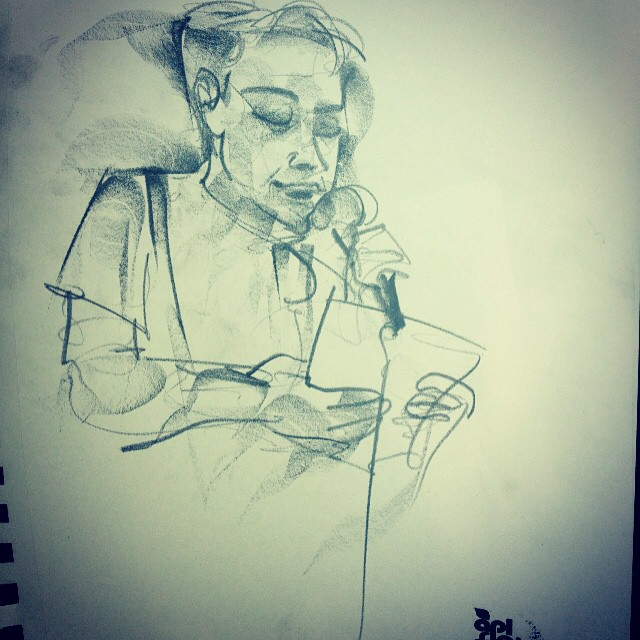 the topography of a poet – an interview with KEEGAN LESTER

The official launch of Keegan Lester’s debut poetry collection, this shouldn’t be beautiful but it was & it was all i had so i drew it, will be held February 18, 2017 at 6 p.m. at 123 Pleasant Street. The last time I saw Keegan Lester perform was June 20, 2016, West Virginia Day, and coincidentally, the longest day of the year. A full Strawberry Moon hung outside 123 Pleasant Street, the last stop on the Travelin’ Appalachians Revue’s second annual tour. The Revue, a project co-founded by two Morgantown friends, was created to broaden the way people view culture in West Virginia and all of Appalachia. Many of its travelin’ performers call Morgantown home.

Though a native of Huntington Beach, California, Keegan spent his formative summer and winter breaks in Morgantown with his paternal grandparents and came back to Morgantown to earn his undergraduate degree from West Virginia University. These days, he’s living and writing in New York City and performing with The New York City Poetry Brothel. It’s his job to entice partygoers into the speakeasy’s back room for a private poetry reading.

In packed-out 123 Pleasant Street on West Virginia Day, the atmosphere was just as intimate. I was caught in Keegan’s cadence, my eyes locked on the performer under the hot stage lights. And then he did something that I have never seen a poet do before. He stepped off the stage and onto the sticky floor of 123. He embraced the crowd and in doing so, made us a part of his performance and of his work.

The night was undoubtedly a special homecoming for these Appalachian musicians, artists, and writers—and for the audience who got to be a part of it. But for the collective’s sole poet, the night felt less like a homecoming and more of a wonderful going-away present, an “icing on the cupcake moment.”

“I was feeling emotionally drained by the time I got to the Travelin’ Appalachians Revue tour,” Keegan said. “I was getting asked to go to all these places around the country and read and I still couldn’t get a book published. It didn’t make sense to me that I had all these people from afar who were interested in my work, but the establishment wasn’t ready to back it.” So he had decided. He was going to give up touring and writing professionally. He would pack up and leave New York to head back to Huntington Beach where he would help with his parent’s air compressor supply business.

“When I left New York, I didn’t even renew my lease. I was so sure I was going to leave. I did a lot of those Travelin’ Appalachians Revue readings with a chip on my shoulder, but I tried to enjoy it as much as I could. I didn’t know if I’d ever get to do it again. Every night I went out there, I had to give it my all like it was my last.”

“If I can just get to West Virginia, everything’s going to be fine.”

Though Keegan has published rather prolifically in indie lit journals and graduate journals around the country, he felt he would be unable to publish the kind of book he wanted in the way in which he wanted. That was until he received an email from Slope Editions. His manuscript, this shouldn’t be beautiful but it was & it was all i had so i drew it, was selected as the winner of the 2016 Slope Editions Book Prize. This awarded Keegan his first book-length publication and launched him in to a two-month book tour in cities across the eastern United States, including a stop at our very own 123 Pleasant Street.

“For me, West Virginia wasn’t a place to be escaped. It was a home. I’m launching my book there because I know that’s where I’m the most loved and that’s where I love most pure.” For Keegan, Morgantown is full of nostalgia and idealism—the magical place of porches and pepperoni rolls, seasons and small-town parades, where on any given summer night it can be, as his grandmother says, “about to pour the rain.” It’s where, from a young age, he was granted the freedoms to be who he wanted to be. “There’s this beauty about the place. I felt protected and a safeness there that I didn’t feel anywhere else.”

“For whatever reason, it’s always been a place that’s held spiritual or otherworldly kind of magic for me. I’ve always wanted to be of that place.”

That’s why many of Keegan’s poems, including those in this collection, were written in and about West Virginia. “If I hadn’t been in love with West Virginia, if I hadn’t had these family members that helped me grow and understand the world more clearly, if I hadn’t been so devoted to the idea of Appalachia and the fact that beautiful things are made in Appalachia – whether it’s art or music or even just people – I don’t think I could have arrived at this collection.”

The collection’s title comes from Elsie Driggs’s 1927 Pittsburgh, a grainy painting of industrial-era Pittsburgh on display at the Whitney Museum of American Art. In its exhibition label, the Allegheny artist says her smoggy city wasn’t supposed to be beautiful, but it was, and it’s all she had, so she drew it. Keegan’s poems harken back to this idea of redefining beauty. He takes the mundane, whether it be football, coal, or alcoholism—those very things that aren’t supposed to be beautiful—and shows us the beauty within them.

“i can pretend that there’s something that tastes better than the pharmaceutical dust i fell for at fifteen, that could make spirals of color of the stars, of the bulbs around our movie theater’s marquee, the halos that my grandmother could see too. she called them christmas one evening when she was driving & we knew she needed cataract surgery, but we wasn’t gonna say a damned thing. i can feel that christmas now, looking out into it.”

from “neither of us can be who we are without football. it’s true the way a cardinal can’t be a cardinal without both”

“The best way to be a writer is to learn how to move people. I wanted to make whatever I was doing a gift. And if I couldn’t get the ideas across to my grandmother or the people that I loved, it felt like I was doing something to gratify myself and not to gratify others.” This revelation occurred to Keegan during a stint in West Virginia after he finished graduate school. His grandmother had had a stroke and lost her ability to conjure language. At the time, she needed less of a caregiver and more of a friend. “It was a really easy way for me to figure out what was important to me and what wasn’t. I grew a lot in that year. I was learning how to be a better human and how to take more initiative and how to take care of people better and be more aware. I understood how close I was to my grandmother.” Though she had lost her ability to speak, Keegan understood that she had not lost her ability to think. It was then he realized that the stories he wanted to tell were for his grandmother and about his grandmother.

“the one thing i know is real is that my grandmother used to steal coal from her father to warm her school house. that was her job: steal coal, so other children could learn to read. when you think of west virginia, think of her.”

from “while i was out getting drunk night after night, there were entire collectives of people searching for lions.”

Whenever he’s in Morgantown, he’ll sneak his grandmother out on a balcony of the Waterfront Hotel. They’ll fold up paper airplanes and throw them off the top the building. “It’s something that we probably shouldn’t do, but at the same time, if you saw how excited she was to do something like that…. It brings her such joy. That’s what I want my writing to do for people.”

Come throw paper airplanes with Keegan Lester and friends at his book launch and reading on February 18, 2016 at 6 p.m. at 123 Pleasant Street.